In the modern world, technology has given us the ability to interact with each other in a way we had never thought possible. Since the birth of the internet, people throughout the world now have the ability to access information that was never available to them before. With this rise in internet usage after the millennium, people migrated away from traveling to local areas of a public congregation to seek the information in the comfort of their own homes. Gaming as an industry has also recently dived into the marketability of the internet gamer and social media aspects of the internet. Thus the social network gamer is born. With more and more companies trying to get in the market for social media entertainment, a new gamer was created from the onslaught of gaming availability, the Anti-social social gamer.

It all starts innocently enough; a few friends have been pestering you for months, maybe even years to join them in a social gaming world. The thought of being able to explore fantastic worlds and defeats foes with your friends is intriguing. Reluctantly it is agreed to go ahead with their proposal. Once again the peer pressure of friends has caused you to take a risk. Logging onto the internet, you direct the internet browser to the site’s location and begin the sign-up process. Unbeknownst to you, that their simple request would cause your social life to be exactly the opposite.

After a few minutes adjusting to this strange new world, you have been thrust into, you quickly become bored and sign out, and go about your normal life. Throughout the day you find yourself wondering what your friends are up to, and make a mental note to check as soon as you arrive home.  Just like when you were a kid rushing in the door to watch TV, you rush over to the computer and log in to check the world. Throughout the day your friends have made posts and requests for various things in the game. A few of them even sent you a request to join them on a quest in the game.  The thought of helping a friend do a simple task makes you feel important, so the decision is made to give it a try. The downward spiral is started.

Hours have passed by as all the new environments and challenges have caused time to become irrelevant.  Each day the time spent in the gaming world has increased slightly as new areas are explored and new tasks are undertaken. You find yourself still able to go out with your friends that night, but somewhere the conversation becomes dull and thoughts drift back to the fantasy world you are now part of. Once more a mad dash for the computer is made as soon as you arrive home.

For days this activity continues. Each day the time spent on the gaming world increases while the time with friends or in public areas decreases.  The only way you interact with them is in the game. Despite their request to come and hang out with them on various days, you find yourself making excuses as to why you cannot attend. No longer do you think about what type of activities to do with your friends; instead, your main concern is getting to the next level.

Weeks later, the phone calls have stopped. On rare occasions, friends are seen inside the game and even then they do not make conversation with you. All of the free time that was once spent out in the real world going to a park, shopping, eating out, or visiting with friends has now become just a vague memory.

A few months after the gaming world has taken control of your every thought; days begin and end with exploring, questing, and leveling. Patterns of tardiness to work, sleepless nights, and even skipping meals emerge, all of which are of no concern to you. In the quest to spend more time with your friends, in what could have been a fun social experience, the unseen commitment to a fantasy world has cost you those very friends. In a world full of computer-controlled avatars, faceless people have replaced the very real faces of those once cherished. None of this bothers you because you are in your element, one of the elites in a fictional world. 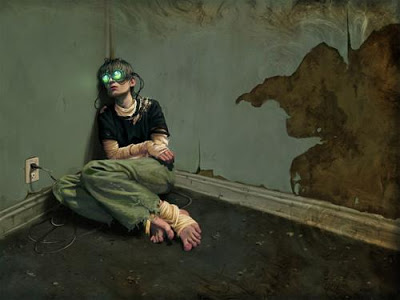 I'm a fun-loving man who does business analytics and supply chain things.