In the days and tales of ancient Beowulf, women were often mentioned within the tale. Throughout the tale, many female characters are mentioned: Wealhtheow, Hygd, Modthryth, and others. What is the importance of these brief encounters of heroes and the women that appeared throughout Beowulf? The roles of these women throughout Beowulf are portrayed as peacekeepers amongst the warriors of the time.

This is seen in the early lines of Beowulf with how Wealtheow, Hrothgar’s beloved queen, followed the customary rituals, met the men with a full cup of mead and while Hrothgar drank went “offering everyone, young man and old / the dole he was due…” (Beowulf 555-556). After the demise of Grendel, the creature tormenting the Scyldings, Beowulf is once more graced with awards and treasure and Hrothgar is so grateful that he adopts Beowulf as a son. Wealtheow plays the part of the peacekeeper during this hasty action and asks king Hrothgar: “Employ as you please / wealth and rewards, but bequeath to your kin / rule of this realm…” (Beowulf 1036-1038) to not only remind the king of his two sons, but also to keep the troubled Hrothulf calm and from performing any harsh actions in the future. 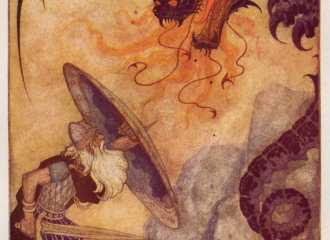 Even the queen herself, speaks of herself and refers to the importance of woman and proclaims to Beowulf:

Signifying that she is just as powerful as Hrothgar himself.

As seen throughout the tale of Beowulf, women during Anglo-Saxon times held importance in the ancient society to not only keep the peace among their own kingdoms but the relationship with other lands as well.

I'm a fun-loving man who does business analytics and supply chain things.